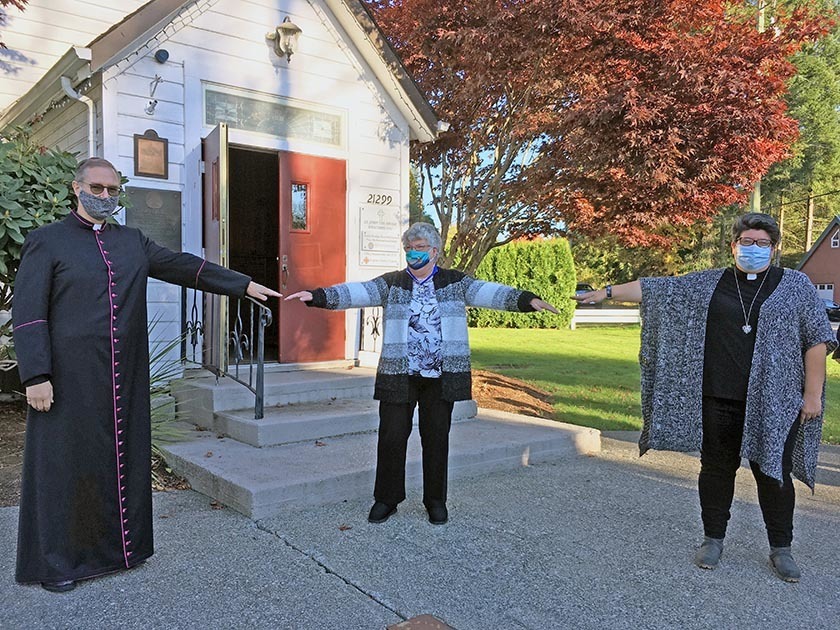 As with many diocesan parishes, St. Laurence Coquitlam, St. Mary the Virgin, Sapperton, St. Stephen the Martyr, Burnaby and St. John the Divine, Maple Ridge held their ODNW investiture ceremonies on November 1, All Saints Day. And two of the investitures involved ODNW couples in their "bubbles."

Mrs. Muriel Minshall, ODNW is a founding member of St. Laurence, established in 1963. One of her many contributions is to offer and coordinate Intercession and Prayers for Healing at the Sunday morning worship. Her husband, Ron Minshall, is also a recipient of the ODNW, having been invested in 2012.

Muriel is a founding member of St Laurence.  Since 1963 she has contributed to adult Christian education programmes and served on the Prayer Link and Pastoral Care teams.  In 1993 Muriel earned a Master of Divinity degree from VST.  For the past twenty years, she has offered and coordinated Intercessions and Prayers for Healing during Sunday morning services.  Muriel’s kindness, humility, and deep spirituality, and her belief in the power of prayer, have been an immense gift to St Laurence. Fay is a quiet, gentle lady who is a very large presence at St. Mary’s. She is supposed to be retired, but we still look to her when we need background information. Fay`s ACW experience has proved to be invaluable as St. Mary`s ladies re-establish a women’s group. She is responsible for organizing many successful fundraising activities over the years. In fact there are very few of the many volunteer opportunities available at St. Mary`s where she hasn`t been involved. Ms. Rosemary Anita Vera Stasiuk, ODNW was invested at St. John the Divine in Maple Ridge. This wonderful celebration at the diocese's oldest church building and very first Anglican parish (transferred from across the Fraser River many decades ago) also involved members of diocesan ordained leadership, Executive Archdeacon, the Venerable Douglas Fenton and Mission and Ministry Development Committee Chair, the Reverend Philippa Segrave-Pride. From the photos submitted we see that Archdeacon Fenton and Reverend Segrave-Pride were helpful in affirming that physical distancing protocols be observed.

Wisdom, Counsel, Understanding, Endurance, Reverence, Knowledge, Awe of the Lord - Rosemary possesses these gifts of the Spirit. St John the Divine, Maple Ridge, has witnessed these gifts revealed in the many ministries in which she serves. Of all the gifts, we know the greatest is Love. Love fuels Rosemary’s care and dedication, and brings excellence to her work. Rosemary loves the people of St. John the Divine, and they love her right back. Rosemary with the diocesan visitors

At St. Stephen the Martyr, Burnaby the newest member of the ODNW, Mrs. Valerie Krause was invested with the Order. In the sanctuary the four members of the ODNW present in-person posed with a fifth member who was present online. For the exterior shot, according to rector of the parish and photographer, the Reverend Ruth Monette, a reminder about physical distancing even whilst posing for photographs had just been given. Also a great shot of Val indicating the presence of her name tag on the parish's ODNW plaque.

Val became a member of St. Stephen’s in 1985 and has not stopped since that time. As a direct result of her family’s lifelong support of the Anglican Church, Val is a faithful participant in every aspect of church life. She has guided her three children and now her grandchildren in the way of “church” and remains very active with many Parish ministries, including serving as Warden and co-coordinating major fundraisers. Ask Val for help and her answer is “YES”. May 9
St. Brigids Eucharist
May 9
St. Hildegard’s Sanctuary
May 10
Violence in the Bible