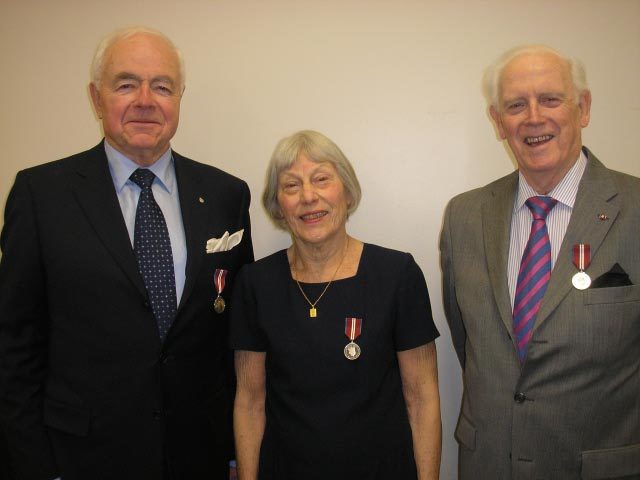 St. Christopher’s of West Vancouver, always a community involved church, was recently recognized in the larger community by the presentation of Queen Elizabeth 11 Diamond Anniversary medals to three members of its congregation for their volunteer service to West Vancouver and to Canada.

Hilary Clark was given her award for work in health care, community college, and music. She was elected to the Board of Lions Gate Hospital and became its first female Board chair, leading the hospital through the political chaos of the abortion crisis, maintaining women’s right to choice. Upon retirement from Capilano College/University, she founded the Ambleside Orchestra of West Vancouver, and managed it for 20 years. A particular outreach was the initiation of a series of free band concerts in Carnegie Centre for the people of the Downtown East Side. The orchestra gives public concerts as well, and takes its music to the nursing homes of the NorthShore.

Bill Ireland was cited for his contribution to St. Christopher’s as a Parish Trustee, and past Diocesan Registrar. He was a founding member of the West Vancouver Community Centre Services Society. He has been very involved with the Canadian Forces as Past Honorary Colonel of the British Columbia Regiment. In such a role he regularly participates in the church’s Remembrance Day services, often giving the homily.
Over the years he has given hours of his time and professional training to various community arts and other charitable organizations.

Les Strike has been an active member of St. Christopher’s for many years where he had served as Diocesan Representative for 10 years, and is currently a sidesperson and lay administrator. His major love and one of his most important achievements has been with Scouts Canada which involved 67 years of his life. Their teaching of service to one’s country has obviously been well learned as Les has also been a member of the Council on Drug Abuse, and chair of the Order of St. John Palliative Care Foundation.

If you know of a Queen Eizabeth II Diamond Jubilee Medal recipient from around our diocese please let Randy Murray know.