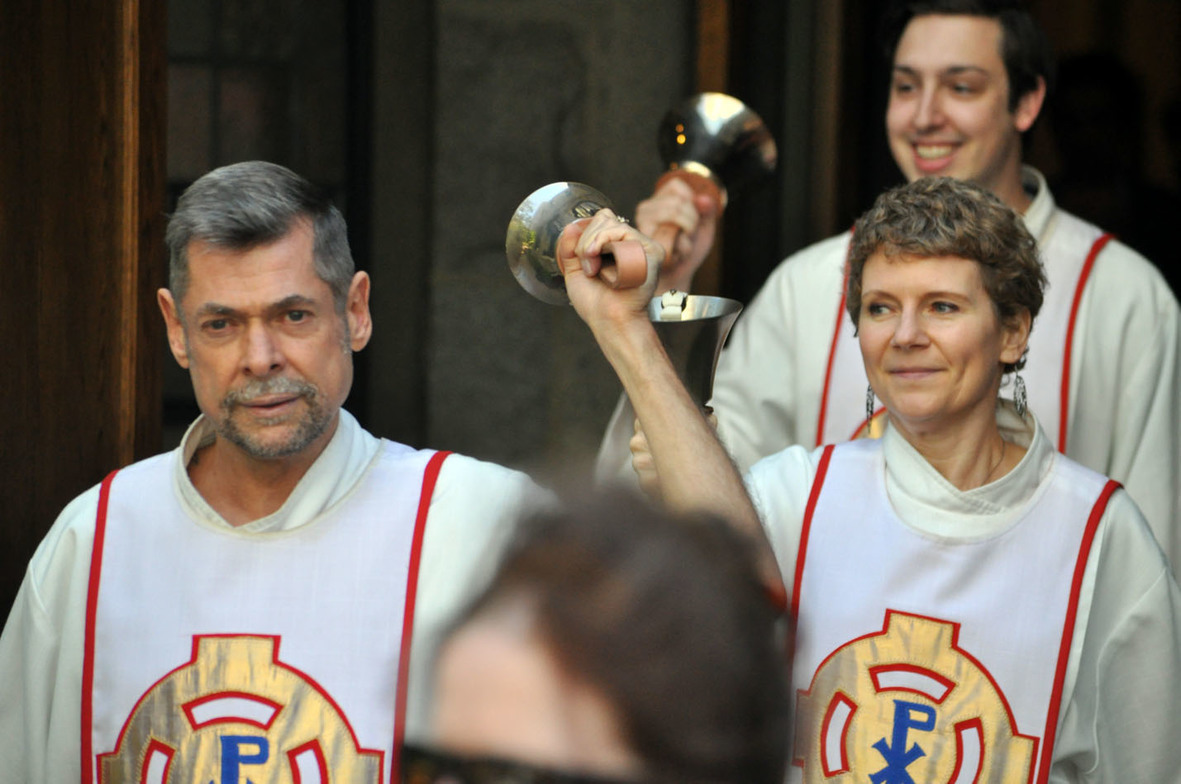 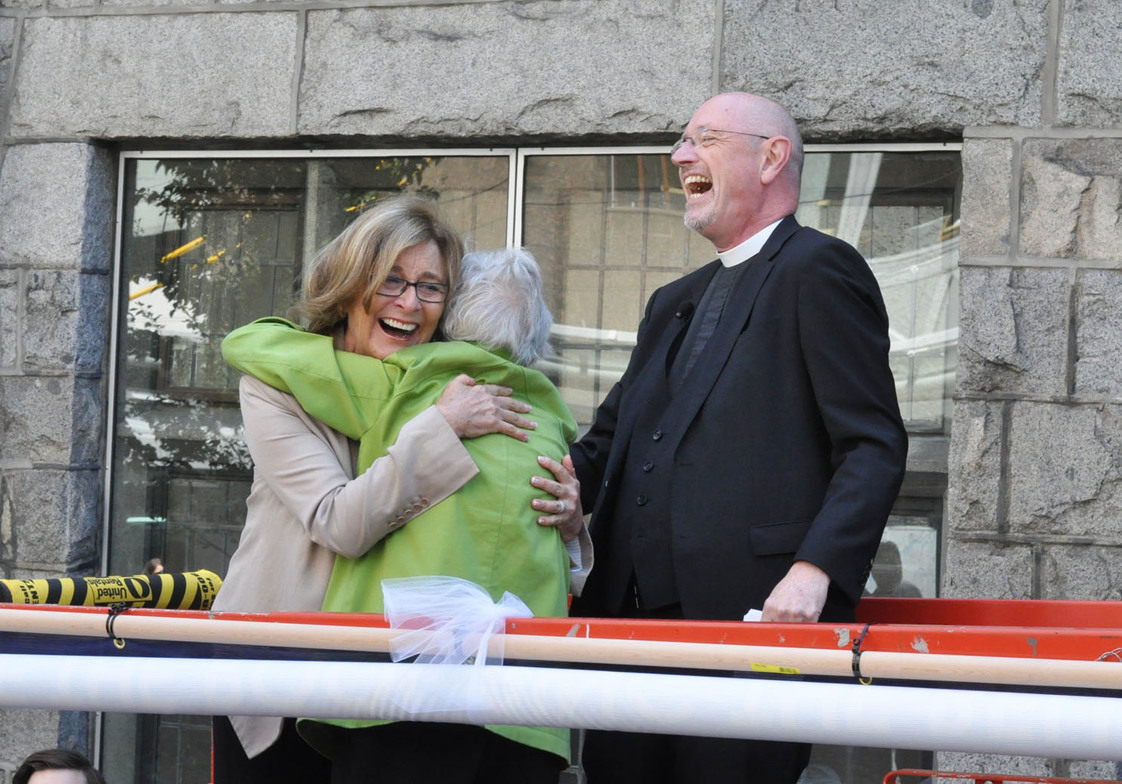 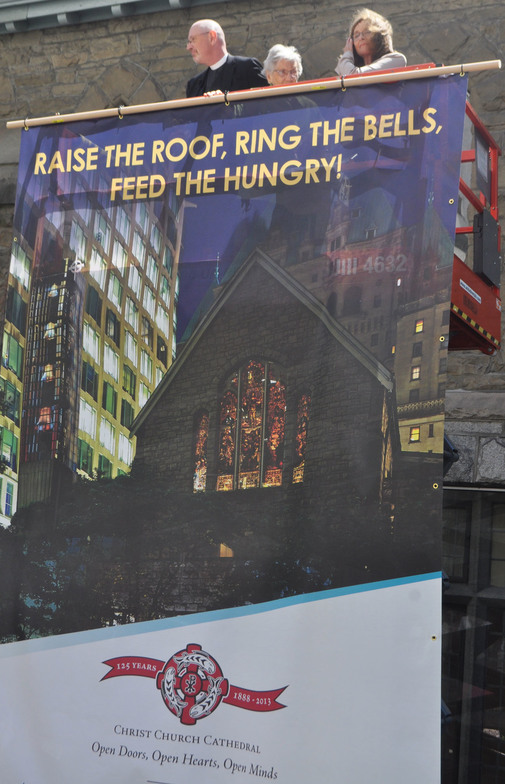 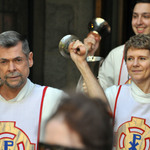 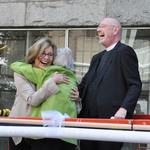 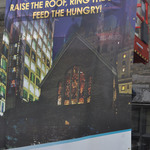 At the launch event for the campaign entitled Raise the Roof, Ring the Bells, Feed the Hungry, Darlene Poole announced that the Jack and Darlene Poole Foundation will provide the first $2.5 million toward the project.

The announcement component of the launch began with a procession led by members of the Cathedral Choir ringing handbells, followed by Dean and Rector of Christ Church Cathedral, the Very Reverend Peter Elliott climbing up onto a scissor lift where he was joined by 92 year old Margery Kellett representing the Cathedral Congregation and then came Darlene Poole. Dean Elliott spoke first and summarized the three pillar campaign, then Darlene Poole announced the Jack and Darlene Poole Foundation gift. Once the announcement was made the scissor lift travelled about 15 feet up to the roof line of the venerable Vancouver landmark and Margery cut the ribbon unfurling the campaign banner which will remain in that location, the Cathedral’s Hillman Garden just north of the Burrard and West Georgia intersection in downtown Vancouver until the fundraising campaign is completed by late 2015.

“Jack and I always believed that at the heart of every great city there are a handful of iconic buildings that help represent the character of the community,” said Mrs. Poole, wife of the late Jack Poole, one of British Columbia’s best known business leaders and philanthropists. “Here in Vancouver, Christ Church Cathedral is one of those places. It’s a pleasure to be a part of this timely community campaign, and I hope others will join Christ Church Cathedral as it continues to serve our community in the years ahead.”

“Once in a generation there is a project that can justifiably be called a legacy gift, the sort of gift that will enhance our city for generations to come. The bell spire, new roof and kitchen expansion project at the Cathedral is just such a project.” said Peter Elliott, Dean and Rector of the Cathedral. “When it’s completed in late 2016, the bells will ring at the beginning and end of the workday, on Sundays, for weddings and funerals, and to mark special celebrations in Vancouver’s civic, interfaith and multicultural community. The new roof will also complete our seismic upgrade that began 10 years ago, and the expanded kitchen will enhance the Cathedral’s work of providing daily meals to the hungry and homeless in Vancouver’s downtown.

“The project will also protect the heritage of this historic and much-loved church, and the bells will proclaim the compassion and peace that this place represents,” Dean Elliott added. “We are very grateful to the Jack and Darlene Poole Foundation for providing one-third of the funding for this project, and equally pleased to invite the community to join us in raising the balance.”
For 20 years, the Cathedral’s congregation has offered a food outreach ministry serving homemade soup and sandwiches to about 100 people in need each day between September and June. The expansion of the community kitchen will better serve Vancouver’s hungry.

The addition of a bell spire to the building completes a long-standing vision first contemplated 40 years ago at the time of the development agreement between Christ Church Cathedral and Park Place. The bells will toll a version of the well-known Westminster Bells in London.


For information about the Raise the Roof, Ring the Bells, Feed the Hungry campaign, please visit the website.