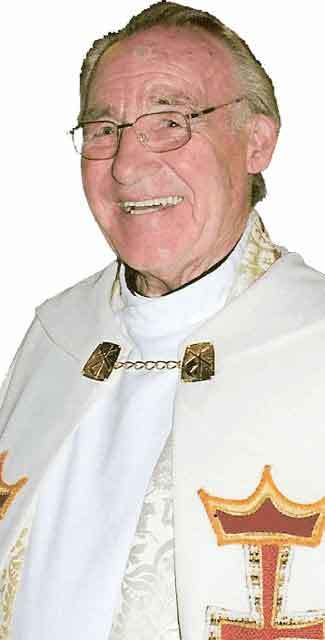 A Celebration of the the Eucharist in thanksgiving to God for the life and ministry of Rev'd Ray Waller took place, Saturday, February 11th, at St. Christopher's, West Vancouver.
Ray enjoyed a very fulfilling life. Born in Kent, England,
he spent his early childhood in Malta, where his father served
in the Royal Navy. At ten years of age the family, now including
Ray’s younger sister Evelyn, returned to England.
Ray joined the choir at St. John’s Torquay, Devon, where his
leadership qualities, fine voice and perfect pitch lead to his
appointment as Head Chorister. It was here that he experienced
the joy of worship and service that would engage his passion and
sense of vocation. As a youth, Ray demonstrated a very high level
of athletic ability in boxing, rugby, soccer, cricket and grass hockey.
Had the War not intervened, he would have played rugby
for England.
Ray worked briefly for the Westminster Bank before enlisting
in the Royal Naval Volunteer Reserve at the age of 19. First serving
as an Ordinary Seaman in Destroyers on convoy duty where he
survived the loss of his ship, he then came up through the ranks,
served as an Officer on Motor Torpedo Boats and commanded
a mine-sweeping flotilla in the Baltic Sea at the end of hostilities.
Throughout his life, Ray was deeply influenced by his mother’s
faith, often using the letters she wrote to him during the war
as a source of inspiration.
In 1946, Ray, now married and with a son (Paul Raymond)
re-entered civilian life as a Trust Officer with the Westminster Bank.
In 1949, a second son was born (Robin Timothy). During this period
Ray found employment in sales where he was in his element.
In early 1957 the family emigrated to Canada, crossing the Atlantic
to New York and by train to Toronto and then Vancouver. After three
months of searching, day after day, Ray found a job in sales. Over the
next several years Ray’s work in sales varied from selling door to
door as a Fuller Brush Man to becoming Sales Manager with BCAA.
It was during this time that Ray met a professor from the
Anglican Theological College who invited Ray to train to be
a priest. He had to make a key decision. His lifelong desire to
follow God’s call became a reality. All the families’ assets were
liquidated in order to put Ray through college. A key to Ray’s
training and the family’s support was the generous financial
support provided by several businessmen. Ray embarked on
a three-year course at the Anglican Theological College. After
ordination in 1962, Ray served as assistant priest at St. Helen’s
West Point Grey. His first parish appointment was All Saints,
On October 4th, 1976 Ray and Dolores were married
at Christ Church Cathedral.
During his ministry, Ray served as chaplain at Oakalla Prison,
the Borstal Institute and the Haney Correctional Institute. He also
became involved in the Cursillo movement and in the healing
ministry. He served as Rector of St. Agnes, North Vancouver,
Rector of St. Peter’s and St. Luke’s and Priest-in-Charge
at St. Edwards, Richmond.
After his retirement, his ministry continued as Interim Priest
of St. Catherine’s Port Coquitlam, Priest-in-Charge of St. John’s
Squamish; Holy Trinity, Vancouver and St. Stephen’s, West Vancouver;
along with filling in at Sunday Services throughout the Diocese and
officiating at many weddings and funerals. He served as Interim
Chaplain at Lions Gate Hospital, North Vancouver (three times).
He sang for several years with the Vancouver Bach Choir and
the North Shore Chorus.
Ray’s service in the Anglican Church of Canada
extended over almost five decades.
Please keep Dolores and all Ray's family and friends in your prayers.
Tweet