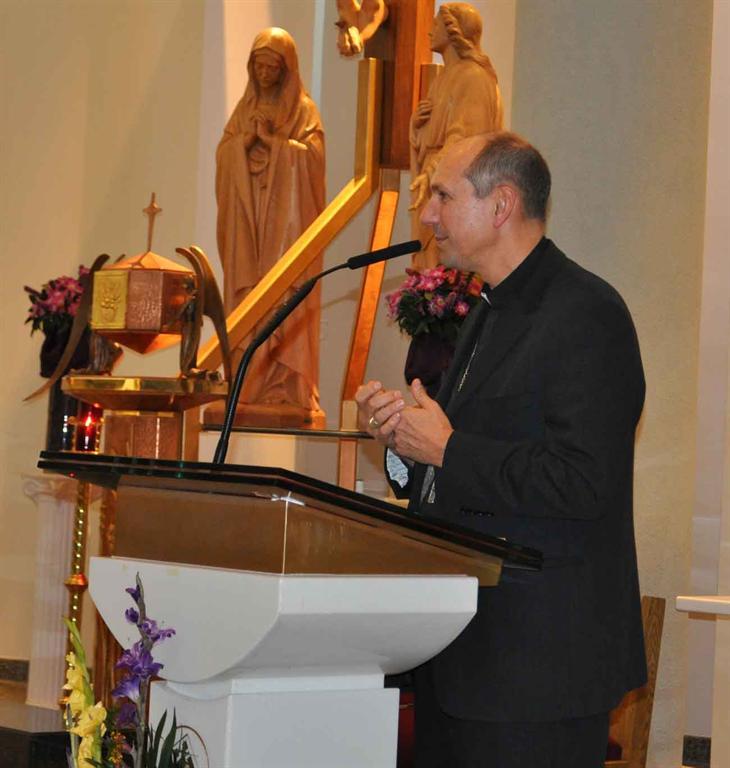 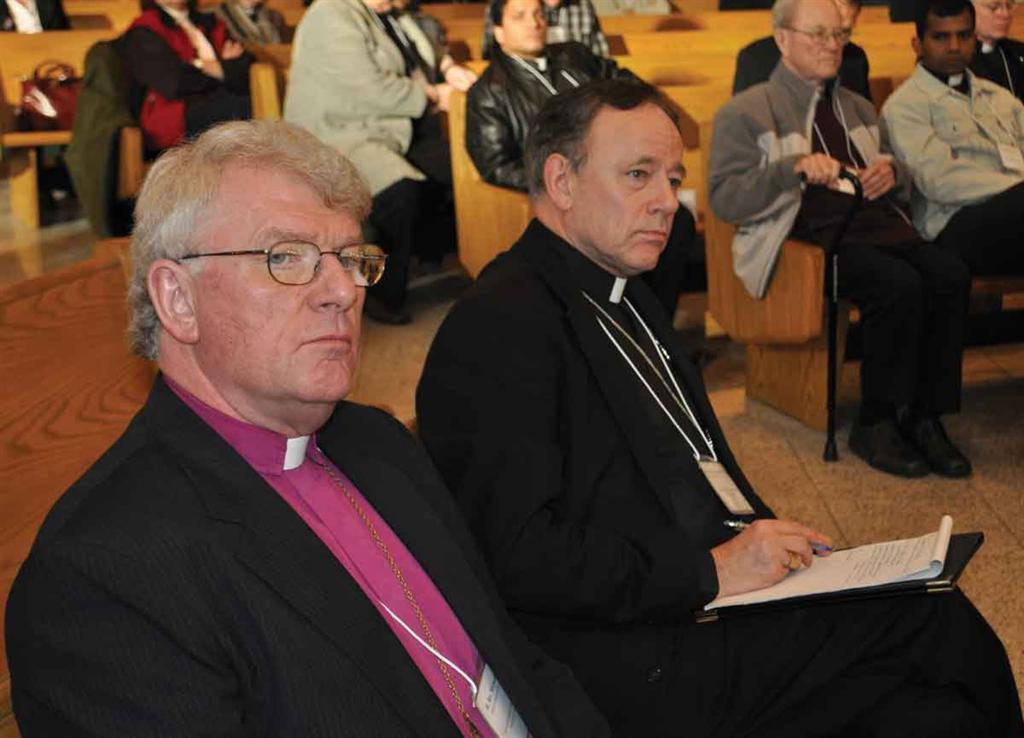 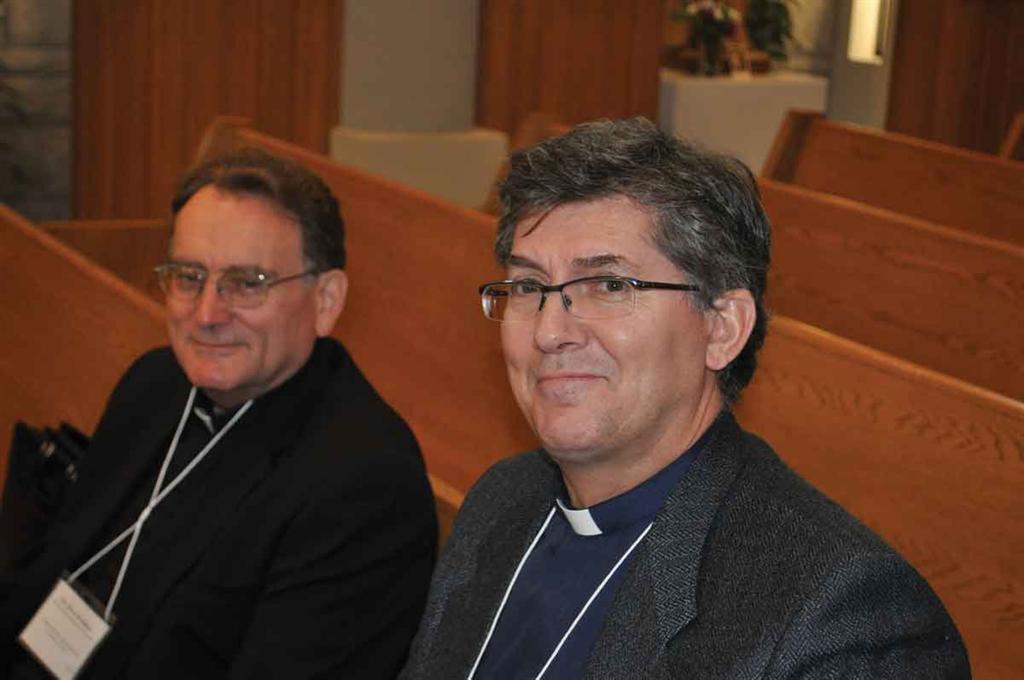 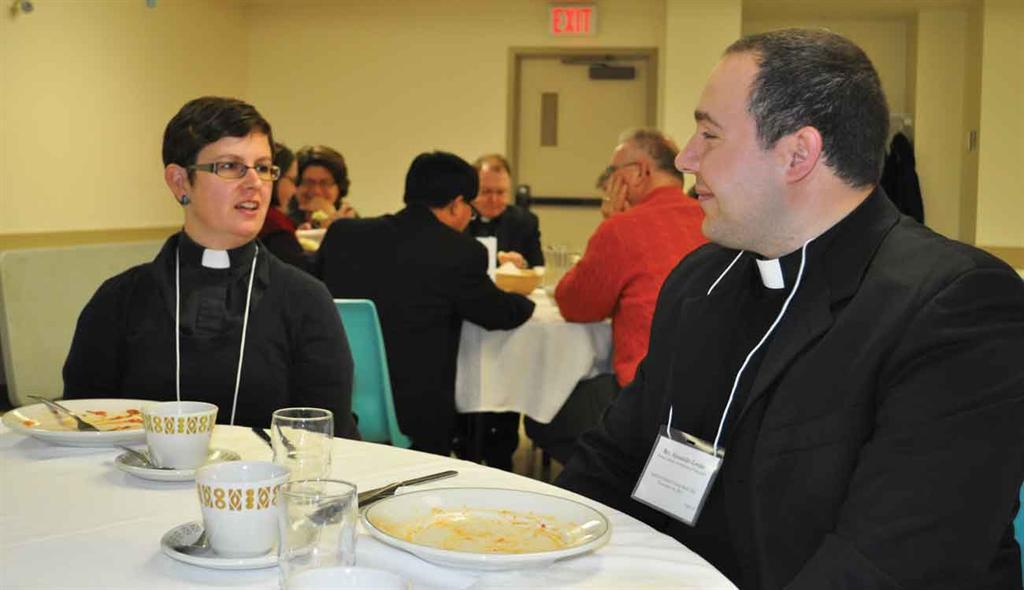 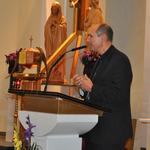 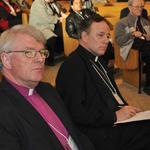 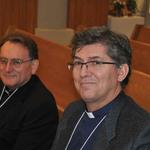 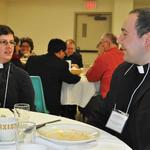 "Lunch was amazing," proclaimed Bishop Donald Bolen. It was, but not just because the people of Saint Helen's Roman Catholic Church in Burnaby treated about 120 Anglican and Roman Catholic clergy to a four-course "banquet," but that the meal was the occasion for dozens of table conversations to take up the broader dialogue between the two churches. A dialogue that has been taking place at the international level for 40 years, and within Canada for 30. Bishop Bolen, of the Roman Catholic Diocese of Saskatoon, was the keynote speaker at only the second interdenominational gathering of greater Vancouver clergy in 28 years: as he said, "You have to stop meeting like this!"

Bishop Bolen's initial keynote address focused on the history of contact and conversation between Anglicans and Roman Catholics stretching back to 1966, and the foundation of the Anglican - Roman Catholic International Commission (ARCIC). Bishop Bolen captured the spirit of the search for common ground in stating: "Whenever we stand up for our faith together, we minimize the scandal of our disunity."

Constructive dialogue between Anglicans and Roman Catholics can help to identify areas in which fellow Christians of the two denominations can collaborate to fulfill the mission of the Church.
The Rev. Trudy Lebans one of two Anglican priests who responded to Bishop Bolen’s address, noted that meeting on the 35th anniversary of the ordination of women to the priesthood was illustrative of one of the points of difference: the role of women in the Church, and its connection to the place of the Blessed Virgin Mary. Although it is critically important for us to be together in mission, as servant to the world, across denominations, partnership would benefit from recognising that we are moving into an era not of faith and doctrine but of practice. As she said, “People on the ground can only listen to our debates for so long before saying: 'We just want to be together.' Perhaps the most encouraging thing is sharing our stories, which we can continue to do.”


The table conversations that occurred over the extended lunch, and later at the small group discussions that are an inevitable part of church meetings, proved the point of the day: no matter what formal principles may be decided by governing bodies, it is the personal contact between individuals that determines how dialogue turns into action and that unleashes mutually supportive creativity. It was the personal relationship between Rev. Grant Rodgers and his Roman Catholic counterpart, the Rev. Bruce McAllister that initiated the meeting; it was personal relationships developed over a number of years that enabled the development of joint position papers within ARCIC; it was even a personal encounter between Michael Ramsey, when he was Archbishop of Canterbury, and Pope Paul VI that initiated the process of dialogue. And it will always be personal relationships between clergy, and between members of congregations, that allow ministry to be accomplished.
Images: Top, Bishop Michael Ingham and Archbishop Michael J. Miller . Upper right, Bishop Don Bolen. Lower left: Reverend Marnie Petersen and Reverend Alessandro Lovato enjoy lunch and dialogue. Below: Reverend Bruce McAllister and Reverend Grant Rodgers. Photos by Reverend Douglas Fenton.

(This is an excerpt of Reverend Paul Strudwick's feature article which will appear in the January, 2012 issue of Topic, the diocesan publication)