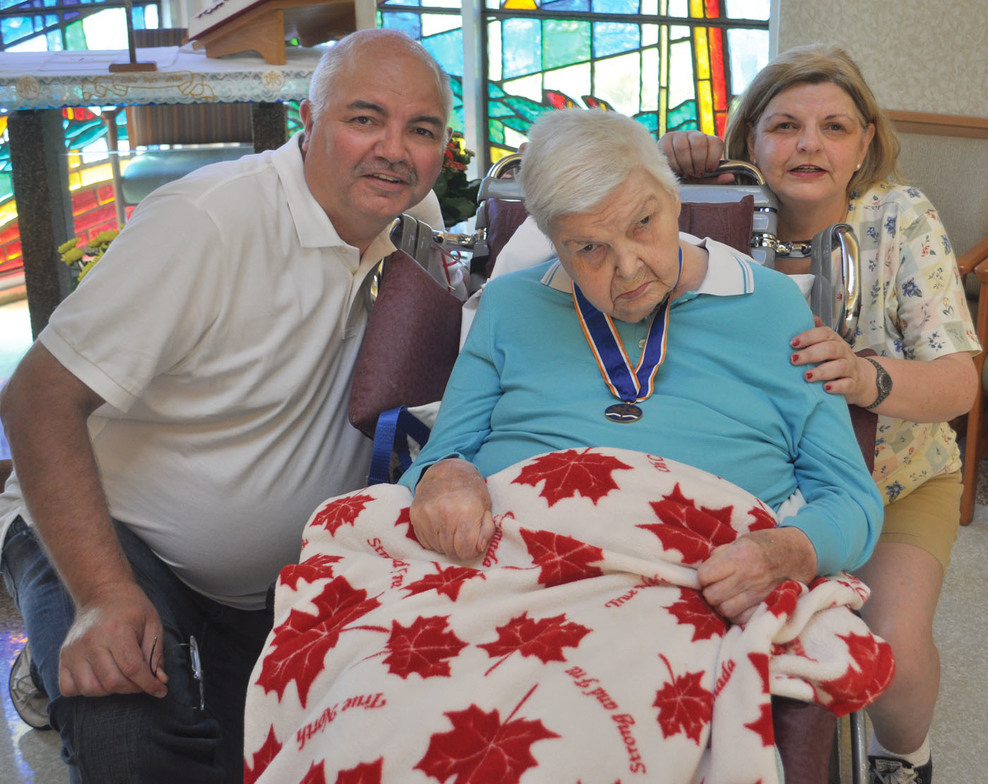 On July 10th, 2014, Bishop Melissa Skelton invested Mrs. Shirley Fox of St. Matthias and St. Luke to the Order of the Diocese of New Westminster at the St. Vincent’s Residential Care Centre, Langara in the presence of her children, rector, and friends. Mrs. Fox was not well enough to attend the Investiture Eucharist at Christ Church Cathedral last November.

From 1936 to 1950 Shirley was a member of All Saints, Burnaby. She was Youth Group and Sunday School organizer / teacher. She also volunteered with WWI injured service men and families. She began her life-long love of church needlework and established a link with Church of England church needlework through the Royal School of Needlework. In later years Christ Church Cathedral became a leading site for liturgical arts. In 1950 Shirley married husband Donald and moved to South Vancouver. They attended both the Marine Drive St. Luke’s and the 62nd Avenue St. Luke’s. She continued to share her talent for church needlework with others and taught classes on this. She was in charge of the Sunday School Guild, was the Altar Guild President for many years and was an active member of the Altar Guild under subsequent Presidents. Shirley also was a Synod Delegate, and Church Committee member through several years. She provided secretarial duties when help was needed to all groups as her husband was Warden through several years.

The Citation presented to Mrs. Fox upon her investiture is as follows:

Shirley has been an active Anglican in this diocese since 1936. Over the years she has served our church in many, many ways. Shirley has shared her talent and love for church needlework and has provided diocesan leadership in the development of this art form.

Unfortunately the photos taken on July 10th with the Bishop present were not clear enough  for web or print publication so the family; Murray, Shirley and Linda Fox were good enought to pose for this photo in the chapel of St. Vincent's, Langara, July 30th.