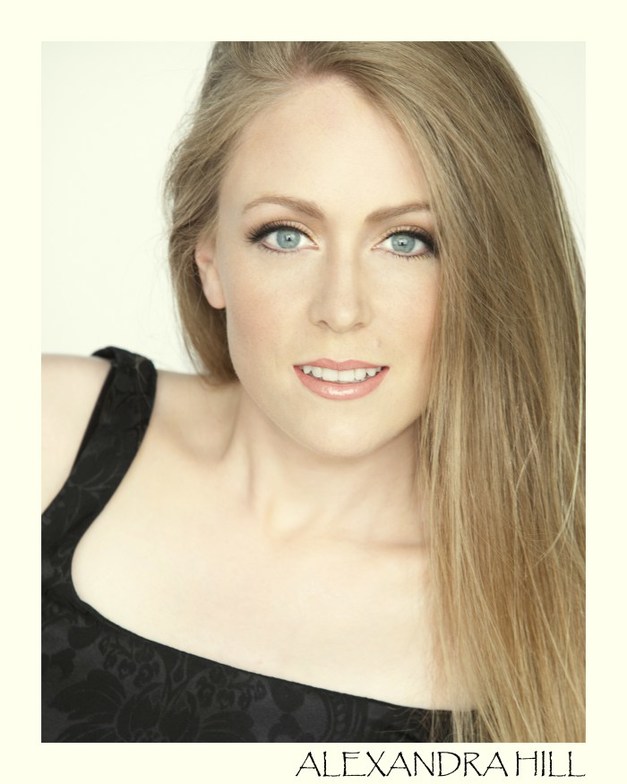 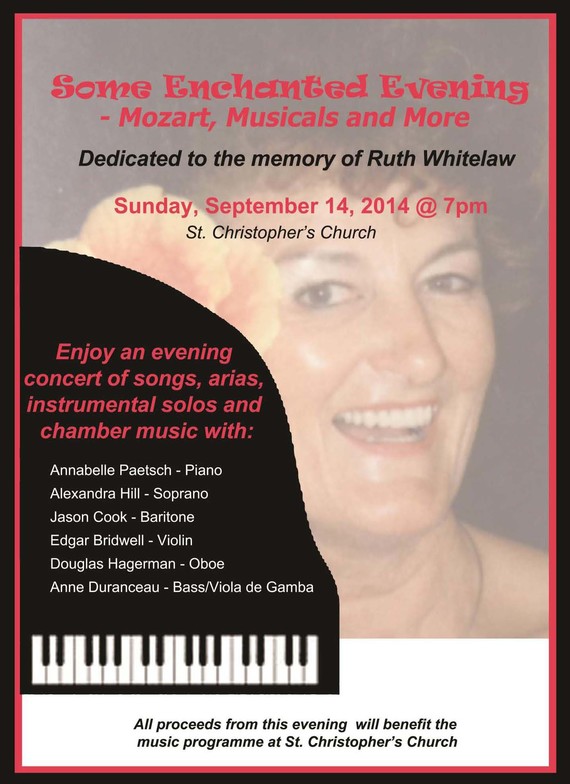 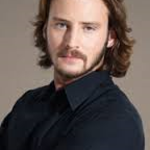 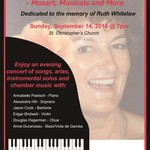 Ruth Whitelaw, a St. Christopher’s chorister who passed away recently couldn’t have been more pleased with the tribute in her memory, presented on Sunday evening, September 14, 2014 before an appreciative audience of 150. Music Director, Annabelle Paetsch, arranged a concert in the nave consisting of excerpts that were here favorites, by composers as varied as Mozart and Andrew Lloyd Webber. Paetsch acted not only as impresario, but also as accompanist, solo performer, and M.C.

Soloists were chosen who have performed before at St. Christopher’s. The theme, “Mozart, Musicals and More“ gave the audience a hint of the range of music they were to enjoy.

The evening began with baritone, Jason Cook, entering the nave from the narthex, wearing a top hat and singing Rodgers’ and Hammerstein’s, Some Enchanted Evening accompanied by Annabelle Paetsch on the grand piano. He was then joined by soprano Alexandra Hill to have a marital spat as the Count and Countess from Mozart’s The Marriage of Figaro . Both singers have powerful well-controlled voices that blended together, with their singing supported by their acting skills.

One of Ruth Whitelaw’s favorite composers was Rachmaninov. To honour her interest, Paetsch interpreted the second movement of his Piano Concerto #2 performed as a solo work. It was riveting.

The evening proceeded with works by Lerner and Loewe, Tesori, Schumann, and dipped into popular recent musicals by Kretzmer/Schonberg and Lloyd Webber. Cook and Hill romanced each other with All I Ask of You from Phantom of the Opera accompanied by the four instrumentalists.

The evening concluded with refreshments in the church hall, and a speech from Ian Whitelaw. The proceeds will go toward the Church’s music program. Stay tuned for information about St. Christopher’s music programming. All are Welcome!