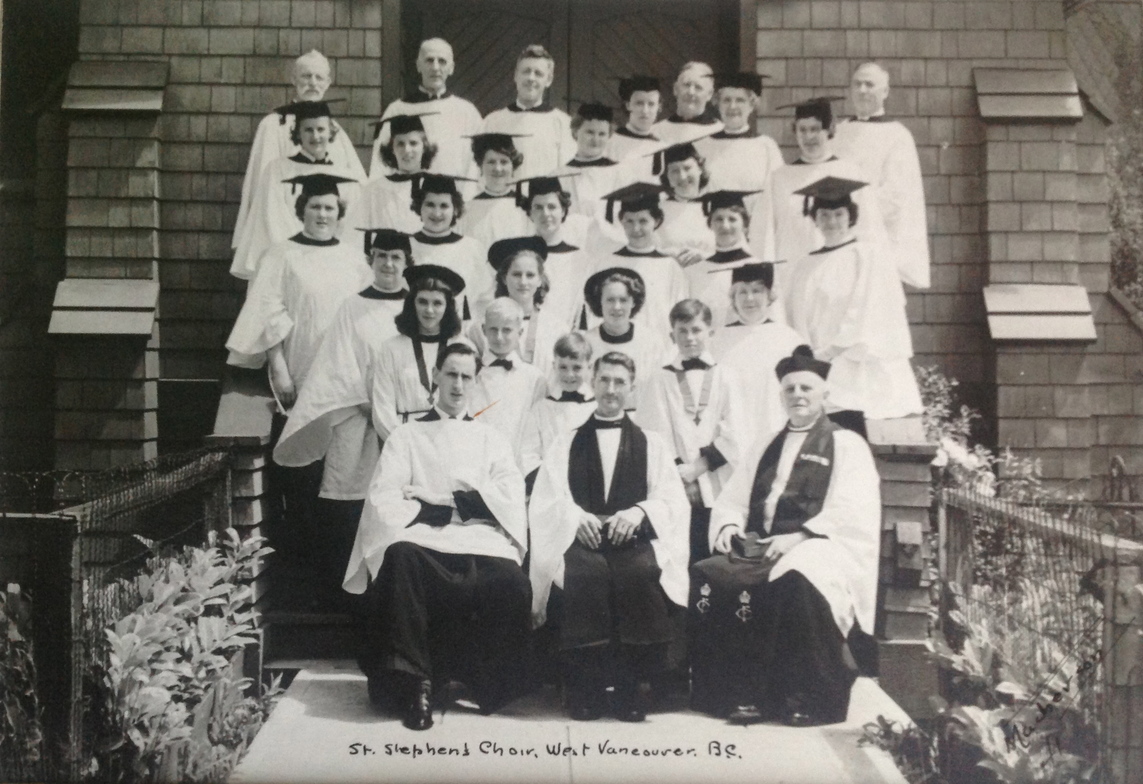 While the ink on the formation of the Municipality of West Vancouver was barely dry, the Anglican church of Saint Stephen’s was holding its first service, April, 1913.This momentous occasion celebrated by Archbishop Adam de Pencier in Dundarave Hall with 43 Anglicans attending will be commemorated when the parish celebrates its centennial with worship led by Bishop Michael Ingham, Sunday, April 7th, 2013, at 4pm.

Following that inaugural service in the spring of 1913 things moved quickly. One year later, property was purchased for $1,600 at 22nd and Fulton and a hall built by voluntary labour. Dedicated on January 10th, 1915, the hall served as an anchor for the growing community with a rectory added in 1920 to the south, and the church building constructed in 1925 located between the hall and 22nd. The first service took place in this building, Advent Sunday, 1925 again with Archbishop de Pencier in attendance. With an eye to the future, two adjoining lots to the east were purchased in 1926.

The site was expanded in 1931, and the basement finished and now able to accommodate the 220 Sunday School children. However, overcrowding in the Sunday School led to the building of Inglewood Hall as an annex two years later.
In 1949, the church was extended to the south to provide better hall space. Three years later, in 1952, a house at 877-22nd was purchased to replace the first rectory, now 29 years old and in need of repair.
The first hall was demolished in 1962 after 38 years of service and in 1966 yet another new rectory house was purchased at 2242 Kings, to replace the one purchased in 1952.
The church moved to its current site in 1967 through a property exchange with the West Vancouver Municipality, who wanted the original site for its Community Centre expansion, making the site at 885 – 22nd available for the new church. The first worship in the current building was Good Friday, April 12, 1968.
In 1986, the church, now free of debt, was formally consecrated, 18 years after its construction. The 1966 purchased rectory was sold in 1989 and the church was without a rectory for 20 years, until the 2009 purchase of the current home on Gordon Avenue, near 21st.

Boundaries
Initially, St Stephen’s parish covered all of West Vancouver. St. Stephen’s clergy conducted worship in three mission areas: Caulfeild from 1921, in the Sentinel Hill area from 1933 and in Wytecliffe and Horseshoe Bay from 1941 (at Mrs Heaseman’s and the Cottage Inn). In 1946, the parish boundaries changed becoming St Christopher’s east of 15th Street. West of West Bay, become St-Frances-in-the-Wood, Caulfeild from which St Monica’s, Horseshoe Bay was split off later.
Therefore it is fair to say that St Stephen’s is the “mother” of two parishes and the “grandmother” of a third.

Outreach to the Community
During the 100 years, St Stephen’s has helped others, both through the diocese and in voluntary outreach.
The list of community organizations benefiting from St Stephen’s quiet support is impressive, not only in its scope but in its diversity. In 1977 almost 28% of the total parish income went to outreach, including personal and active involvement by parish members.
Women’s organizations in the church did almost all the compassionate service for the first 60 years, through a variety of social activities and fundraising sales., St. Stephen’s has supported: Altamont Hospital, Appeal for the North, BC Cancer Foundation, Camp Artaban, Dawson Church Flood Relief, Food Bank, Gastown Workshop, Harvest Project, Lion’s Gate Hospice Society, Meals on Wheels, Missions to Malaysia and East Africa, North Shore Safe House, North Shore Stroke Recovery, Old Crow Parish, Save-the-Children Fund, Salvation Army, The Mission to Seafarers, St James Social Service, Tiny Tim Fund, West Van Santa Claus Fund, World Vision, Young Life, Young Wolves Lodge and many, many more.

Recent Changes
• In 1995, Women and teenaged girls were invited to serve as Stewards (up to that point there were only "Sidesmen")
• A new Pavilion was added to the church building in 1996.
• A men’s group called “Men of St Stephen’s” (quickly became known as “MOSS” group!) was founded in 1999. Men of the parish meet monthly for a hearty breakfast and friendship.
• The Anglican Church Women’s group served for its 60th and final year in 2003.
• The “Wot the Dicken’s” Christmas Bazaar commemorates its 29th and final year in 2005
• Jazz Vespers was introduced in 2007
• The lower level of the church was upgraded in 2008 and leased to Cederdale Child Learning Centre
• A new website was launched in 2008.

“The real work of service in the world is not that performed by groups or organizations…. But rather that done by individuals, steadily and quietly responding to the hurt and the pain and the frustration of other individuals. Thus the work of service of the members of a parish such as this canot be fulfilled by writing a cheque… but by reacting positively and compassionately every time there is opportunity, wherever we are. You in your small corner and I in mine”. Rev. E.H Wallace, 1983. Rector, St Stephen’s, 1970 – 1988.

The worship on April 7th, 2013 with Bishop Michael will be the first of a number of events scheduled to celebrate the milestone. Stay tuned to future issues of Topic and the diocesan website for more updates about events taking place at St. Stephen’s during their centenary.