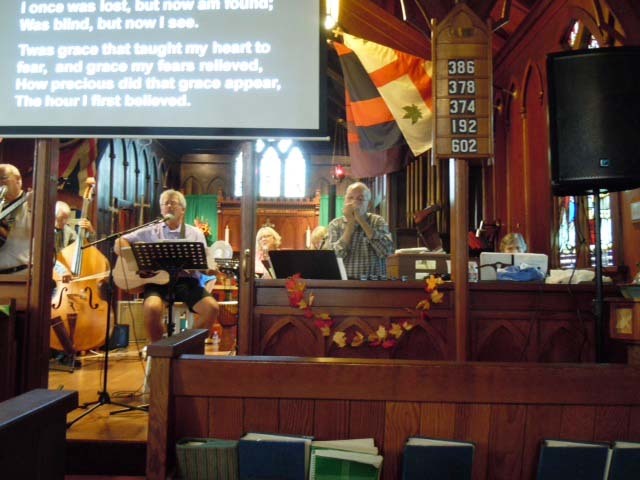 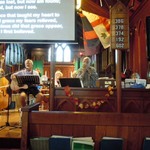 St Mary, the Virgin Anglican Church, Sapperton was pleased to welcome The Hazeltones, a sing-a-long Gospel group who performed in the church on Saturday, September 20, 2014. This eight member band consists of: Bruce Feltham, Bob Fitzsimmons, Jane Harding, Rick Hutching, Debbie Penn, Jim Morrison, Ken Rattray, Jo-Anne Rattray. They take no profit from their performance with all proceeds directed to a charity or charities of the host's preference.

St. Mary's organizers and leadership decided to share the proceeds with the Seniors Society of New Westminster. Representatives of the Seniors Society presented a plaque of appreciation to St. Mary’s after a brief spoken presentation outlining their work in the community.

During the concert, the audience was treated to two full hours of sing-along folksongs and gospel songs, including: Teach Your Children, Blowing in the Wind Danny Boy, I Saw the Light, Amazing Grace and many more crowd favourites. The band's voices, their enthusiasm and the multitude of instruments that they play made this concert a most enjoyable affair. The Hazeltones only perform a few concerts in a year but I would urge you to look them up on their Facebook page and take in a concert when you can.


Prior to the concert those in attendance enjoyed Tea with platters of sweets and fresh fruit served with tea and coffee.

The St. Mary's community is in the last stages of having the hall renovated so we were excited to be able to use the kitchen for the tea. Thank you to all the volunteers who made this such delightful afternoon and especially to The Hazeltones who are so generous with their time and talents.

Images: Top and homepage, The Hazeltones in the sanctuary of St. Mary's, Sapperton with the lyrics for Amazing Grace.  Middle right, the folks who organized and served the TEA.